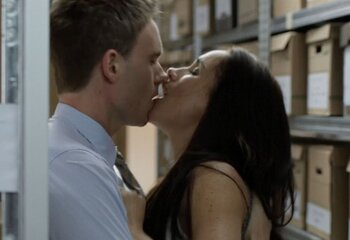 Mmmm... files.
Dwight: Michael, confession. I have done PDA in the office.
Michael: Thank you.
Dwight: I've had intercourse in the office.
Michael: Alright!
Dwight: As has Angela.
Angela: Dwight!
Dwight: As has Ryan, as has Kelly, as has Meredith, as has Phyllis, as has Darryl, as has Creed, as has Michael, and as has Holly!
— The Office (US)
Advertisement:

There's nothing quite like paperclips and staplers to get the mood going.

Work Sex is a subtrope of Making Love in All the Wrong Places, when two characters decide that their site of employment (of all places) is where they want to do it. It may seem unprofessional, unhygienic and most of all uncomfortable, but there's no arguing with why characters enjoy it.

The trope can intersect with Professionals Do It on Desks, however Work Sex refers to any place in a working environment where characters have intercourse. The environments that the trope takes place in are usually storage rooms, private offices or bathrooms. Sometimes the characters are successful, other times they're interrupted, and they don't always get caught either. The trope is not applicable in workplaces that actually have beds, i.e. on-call rooms in hospitals. Nor does it apply to pornography sets, hotel rooms, or professions that require they go to someone's residence (i.e. Pizza Boy Special Delivery).

Compare with Business Trip Adultery, Desk Sweep of Passion, Office Romance, Sleeping with the Boss. Not to be confused with sex workers.

This is Truth in Television, so No Real Life Examples, Please!