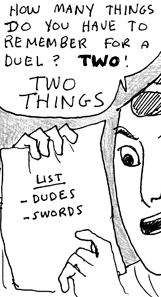 He has a point, Musashi. How do you forget your sword to a swordfight?
"I shall now read the names of the children admitted into the second phase of the test. ... Very well, if there are no other questions, I shall read the list. Reynard Muldoon! That is all. The rest of you are dismissed."
— Number Two, The Mysterious Benedict Society
Advertisement:

An Amusingly Short List is funny because it's barely a list at all. The main joke of the short list is often the fact that someone has gone to the effort of writing out the list or started listing things out loud, despite there being only one or two entries.

Sometimes the humour comes from the fact that the character enthusiastically claims or implies there are many, many potential items that belong on the list... only to remember only very few. Or only one. Or none at all.

May be combined with Damned by Faint Praise, if it's a list of someone's good qualities. Rule #1 can be related: It's common to list only one or two rules, so numbering the rules is unnecessary.

What qualifies an Amusingly Short List as such and not just one or a few items that naturally form as part of dialogue is that it has to be presented as a list. The character should build up expectation of a list—by announcing they have a list, through Body Language such as counting on fingers, via a pause after an item, and so on—and then not deliver on that expectation because the list is unexpectedly, comically short.

A form of Low Count Gag, where the low count is items in a list.

The list of those fired in alphabetical order. Not that it matters.

The list of those fired in alphabetical order. Not that it matters.