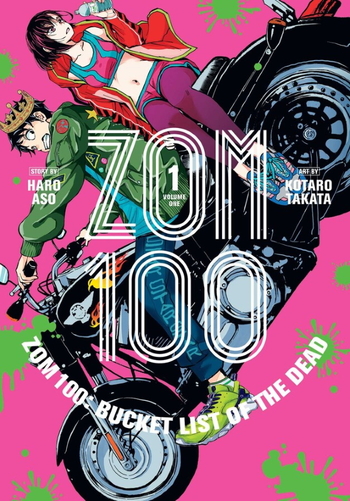 What better reason to scratch off your bucket list than the Zombie Apocalypse?
"Man, I can't believe I don't have to work anymore! I've got three years of vacation to get outta my system! And I intend to make each day count!"
— Akira Tendo as he flees a zombie horde on his bicycle
Advertisement:

He was once a young office worker brimming with dreams, ambition, and a passion for his work. But now he's a 24-year-old trapped in employment at a black company. His life is an endless cycle of miserable labor for awful pay and little fulfillment. These days he'd rather be the protagonist of a zombie film than go back to work. As if something like that would happen...

Akira wakes up one morning to find his landlord eating one of his neighbors. Soon all of his zombified neighbors come crawling out of their apartments to sink their teeth into his flesh and he's barely able to lock himself on the roof as he worries about being late for work. But then it hits him.

He never has to go to work again.

Liberated from his perpetual torment, Akira uses his newfound freedom to do everything he's ever wanted to do in life, writing it all down in his bucket list, "100 Things I Want to Do Before I Become a Zombie".

To him, braving the Zombie Apocalypse is a vacation compared to a dead-end job!

Zom 100: Bucket List of the Dead (ゾン１００～ゾンビになるまでにしたい１００のこと～ Zombie 100 ~Zombie ni Naru Made ni Shitai 100 no Koto~) is a Seinen Zombie Apocalypse Dramedy written by Haro Aso and drawn by Kotaro Takata, which began serialization in Monthly Sunday Gene X in October 2018. It follows Akira Tendo's quest to complete his bucket list in the middle of the Zombie Apocalypse, all while rediscovering a zeal for life he thought he'd long lost.

An official English release by VIZ Media began in Feburary 2021.

Zom 100: Bucket List of the Dead provides examples of: