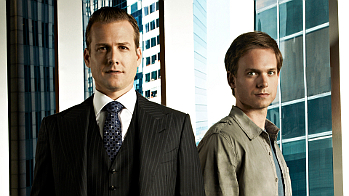 Greenback boogie.
"If you start behind the eight ball, you'll never get in front."
— Harvey Specter, giving Mike Ross a little advice
Advertisement:

Suits is a legal dramedy series created by Aaron Korsh and starring Patrick J. Adams and Gabriel Macht. It debuted on USA Network on June 23, 2011 with a 90-minute premiere episode, and its ninth and final season aired in 2019.

Mike Ross (Adams) is a Brilliant, but Lazy college dropout with an eidetic memory that has allowed him to pass the bar exam without attending law school. A series of circumstances lead Ross into a job interview with Harvey Specter (Macht), one of Manhattan's best lawyers. Despite his lack of credentials in terms of education and practice, his knowledge of the law impresses Harvey enough to hire him as his new associate. Due to the firm's policy of hiring only Harvard Law graduates, Mike is forced to pretend that he has gone to Harvard.

The show's tone is fairly light, similar to Burn Notice, Psych and Monk, though it possesses a great deal of moral ambiguity, with snappy dialogue and plenty of wisecracking. It also contains probably the first instance of the word "shit" appearing uncensored on USA since the cancellation of Touching Evil.

The show's final season began airing alongside a short-lived Spin-Off series called Pearson which follows one of the show's characters, lawyer Jessica Pearson (Gina Torres), as she enters the world of Chicago politics.

The show has a Japanese and South Korean remake.