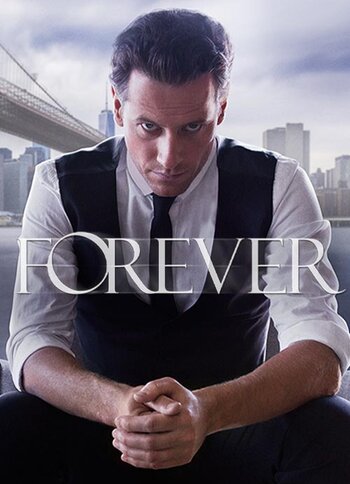 Forever is an Urban Fantasy Police Procedural starring Ioan Gruffudd and Alana de la Garza that aired on ABC for the 2014-15 Fall-Spring season.

Gruffudd stars as Dr. Henry Morgan, New York City's chief medical examiner, who is actually over two hundred years old—whenever he dies, he wakes up shortly afterward in a nearby body of water, for some reason. After two hundred years, though, he just wants to grow old and actually die. In 2014, he crosses paths with Detective Jo Martinez (de la Garza) as she investigates a subway crash that killed fifteen people—Henry included. When he helps solve the case, she requests him as the M.E. attached to her cases, and so They Fight Crime!.

The series wasn't renewed by ABC for a second season, and despite a loyal fan campaign to drum up interest in the show, it ultimately was not picked up by another network or a digital service. However, the complete series was released to DVD as a part of the Warner Archive Collection in 2016, and is currently available on CW Seed

Not to be confused with the 2018 dramedy series of the same name.

Henry: Abe is the only one who knows my secret. Fate brought us together years ago, and if I've learned nothing else from my time here, it's 'Don't mess with fate!'