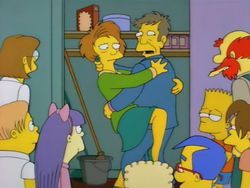 This episode features the blossoming romance between Seymour Skinner and Edna Krabappel in spite of school rules forbidding relationships among faculty. As Bart catches wind of the fling, both use him as an emissary to keep the secret, but Bart eventually gets so fed up he decides to expose the affair, putting Skinner's and Krabappel's careers in jeopardy.

It's another dreary day at Springfield Elementary, where things have gotten to a point Mrs. Krabappel has a stash of firecrackers to wake the kids up after everyone dozes off as Principal Skinner reads the morning announcements. Then, Martin Prince approaches the opportunity to invite his classmates to his birthday party on Saturday, much to their disinterest. They do go eventually, even Bart and Milhouse, if just to escape from a even drearier pretend space trip with Homer. In all honesty though, the party turns out not to be too festive at all, featuring among other things, a "mathemagician" who seemingly doesn't know much about numbers. Meanwhile, Edna and Seymour also attend the event, but they are forced to hide in Martin's tea house as Mrs. Skinner invites herself to the party (as she and Seymour live next to the Prince family).

If the dullness wasn't enough, Martin's mom decides to serve oysters instead of a birthday cake, and almost all of the kids get sick, except for Bart and Lisa (who, in spite of being a vegetarian, pretends to have food poisoning anyway to get out). At the same time, Skinner and Krabappel discuss how they spend their weekends and realize their lives are pretty much boring to the point a mutual attraction quickly develops between them, leading them to kiss while Bart looks. He then tells about it at school during lunch on Monday, which leads to him being summoned to the Principal's office. There, Seymour and Edna explain the situation, including that their jobs could be at risk if Bart ever tattled on them as a conflict of interest could arise, so they decide to buy his silence by tampering with the school records.

Soon, Skinner and Krabappel adopt cooler dispositions while they begin to use Bart to keep their romance away from public knowledge, including making him spend time with Mrs. Skinner, who keeps a scrapbook of old magazine clippings of cake recipes (in spite of her not liking cakes), or having him go to the midnight matinee so Superintendent Chalmers could believe they were having a field trip instead of a date. However, one day Skinner makes Bart say "I love you" to Mrs. K. in front of the entire class, leaving him obviously humiliated. But when even Martin taunts him, he decides enough is enough and leads the entire school to the janitor closet, where they find Seymour and Edna making out.

After school, the children all talk about the tryst between Skinner and Krabappel (or "Crandall", as Homer had always thought), with differing details. However, Ralph tells Chief Wiggum they were "making babies", which leads to a phone call to Superintendent Chalmers, who angrily storms into Seymour's office first thing in the morning, telling him to either break up his affair with Edna, or both losing their jobs. They choose the second option, much to Bart's dismay, who decides to lock himself with them after school, attracting media attention by telling Kent Brockman a giant octopus is at the roof.

There is no octopus of course, but the lock-down attracts the town's attention, with Chalmers urging the three to drop the stunt and resorting to using lights and soft music for the two lovers, but they refuse to budge, up to and including Skinner passing frankfurters for dynamite sticks before insisting on making the townspeople decide on the matter. The indignant Springfieldians claim he and Krabappel had carnal relations, to which he confesses he's still a virgin. After being exonarated by the astounded populace, Seymour and Edna thank Bart for his help, and after apologizing for the inconveniences they tell him they'll drop their affair because of the furore. This turns out to be a lie however, as they return to the janitor's closet as soon Bart leaves.

When Principal Skinner and Mrs. Krabappel share a dance in the romantically-lit cafeteria, the camera spins around them as they embrace.

When Principal Skinner and Mrs. Krabappel share a dance in the romantically-lit cafeteria, the camera spins around them as they embrace.