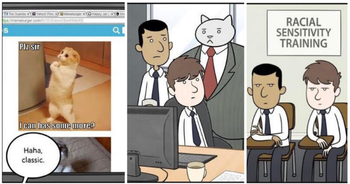 Usually, this program is enacted in big organizations, such as large companies or some government agencies.

A program that is intended to make the participants more aware of social issues in the work environment (such as sexism or bullying) and to teach how to act in a politically correct manner.

Often comes with ridiculously arbitrary rating systems where some behavior is called level 1 or 2 or color-coded green or yellow or red card.

The subjects never like these programs and are always bored while enduring them (even the people whose life would be made better by such programs sometimes prefer being bullied over the sensitivity training).

The sensitivity instructor tends to be a Misplaced Kindergarten Teacher who cheerfully throws out sappy slogans like "labels disable". If male, the instructor will probably give off a bit of a Camp Gay vibe. If the "sensitivity" being worked on is about gender dynamics or sexual harassment, the instructor may be a Straw Feminist who thinks All Men Are Perverts.

Often if someone is being nasty, he is asked to stop, "or do you want to go through sensitivity training again?"

Sometimes, sensitivity training is what employees must go through if they have nothing else to do; the group will then be very motivated if an order comes in.

In real life, these items are entirely the company covering their asses against potential lawsuits, though the fact seems to rarely pop up in fiction. When a sexual harassment or hostile work environment suit comes up (and if the organization is large and old enough, it's not a question of "if" but rather "when"), the firm that you hired to represent you will not be thrilled if they find that you haven't updated your sensitivity training material in thirteen years or done much with it outside of a few token sections in the employee handbook.

This is not necessarily Political Overcorrectness, but even if played straight, it is still meant for semi-humorous effect, and the above-mentioned characteristics are still present.

No Real Life Examples, Please! There's much debate whenever this practice should be standard, which is a Flame War waiting to happen when identity politics are involved.