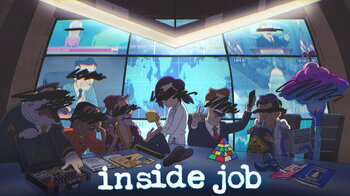 Inside Job is an adult animated Netflix Original Series created by Shion Takeuchi. Alex Hirsch of Gravity Falls fame serves as executive producer on the first season. It premiered on Netflix on October 22nd 2021.

Set In a World… where almost every conspiracy theory conceived throughout the ages is unambiguously true,note  save for Flat Earth, Earth's round, but it is in fact hollow on the inside. Cognito Inc. is a secret organization pulling all the strings to ensure they remain conspiracies. Antisocial tech genius Reagan Ridley (Lizzy Caplan) stands out among the reptilian shapeshifters and psychic mushrooms just for believing the world can be a better place, but she has to constantly wrangle her unhinged father Rand Ridley (Christian Slater), who lost his job as head of the company after almost blowing their cover, and her dysfunctional co-workers, which include D.C. yes-man Brett Hand (Clark Duke), free-spirited yet strung-out biochemist Dr. Andre (Bobby Lee), half-man, half-dolphin, 100% jingoistic super-soldier Glenn Dolphman (John Dimaggio), Cognito Inc.'s Head of Media Manipulation and Subliminal Messages Gigi (Tisha Campbell) and a snarky psychic mushroom from Hollow Earth named Magic Myc (Brett Gelman). As Reagan develops her leadership skills, forms friendships with her coworkers and discovers many dark secrets lurking around even the Deep State itself, she will discover what it truly takes to rule the world.

Reagan Ridley is never afraid to speak her mind in full. Not even when she's breaking up with someone.

Reagan Ridley is never afraid to speak her mind in full. Not even when she's breaking up with someone.