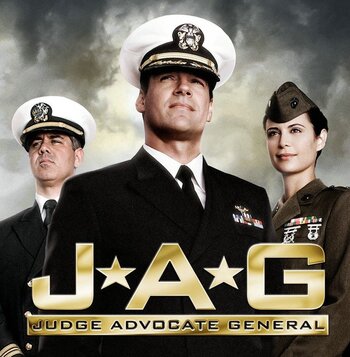 Rear Admiral A.J. Chegwidden: Your record here reads like a cross between Top Gun and A Few Good Men.
Lieutenant Commander Harmon Rabb, Jr.: Sorry about that, sir.
Rear Admiral A.J. Chegwidden: I'm not. The Navy needs heroes. Now more than ever. Pilloried in the press by a liberal media, underfunded by an election-driven Congress and shooting ourselves in the foot every time a sailor gets horny.
Lieutenant Commander Harmon Rabb, Jr.: Yes, sir.
Rear Admiral A.J. Chegwidden: Now, if I repeated those words to the press, the Secretary of the Navy would demand my resignation. For while my words are as true as the blue ice in the Arctic, they're politically incorrect. And today's Navy, Mr. Rabb, sails on the sea of political correctness.
— Season 1, Episode 14, "Smoked"
Advertisement:

JAG (an acronym for "Judge Advocate General") is a long-running TV show (1995-2005), about judge advocates (Pentagon-ese for lawyers in military uniform) in the Department of the Navy's Office of the Judge Advocate General, who deals with military justice matters wherever the forces of the U.S. Navy and the U.S. Marine Corps go in the world.

Created by veteran showrunner Donald P. Bellisario for Paramount Network Television and originally pitched to the networks as a Top Gun meets A Few Good Men, the show lasted one season on NBC before being canceled. It was picked up by CBS the following season and turned into one of the most successful shows in their history.

The first and, to a lesser extent, second season focused primarily on action-packed pre-trial field investigations, while the third and later seasons joined that formula together with an equal amount of courtroom and office drama in the stylistic vein of L.A. Law. Many episodes have storylines which often were Ripped from the Headlines, e.g. the war in the Balkans, introduction of female combat pilots on aircraft carriers, espionage, racial bigotry, fraternization charges, a U.S. sailor accused of raping Japanese woman in Japan, homosexuality in the Armed Forces in the days of "Don't Ask, Don't Tell", crooked contractors, The War on Terror, homeless veterans, senior officers insulting foreign allies, miscarriages of justice, AWOLs and desertions, the Guantanamo Bay detention center, and so on and so forth.

JAG has a number of dramatic episodes, some of which were based loosely on historical events. The main characters are so involved in them that, considering that they're lawyers, it tends to strain your Willing Suspension of Disbelief. Although the show was quite successful ratings-wise, which the longevity alone suggests, it never generated much buzz in the hype machine and it never received any major awards beyond three technical Emmys. Much of that is probably due to the fact that JAG was not, by industry standards, perceived as cutting-edge but rather conventional in its set-up, and that the largest demographic audience share was elder Middle Americanote That U.S. perception bias was probably lost on many foreign audiences, as JAG was, by its fifth season, shown in 90 countries around the world.

In any case, its popularity led to a spinoff launched through a Back Door Pilot in its 8th season, NCIS, which has managed to become more popular (and has remained longer on the air) than its parent series.

Note that the tropes on this page are divided into an overall series section (at the top) and a specific-to-an-episode section (below). Thanks.

JAG as a series provides overall examples of:

"This court-martial is adjourned."