Series / How to Get Away with Murder 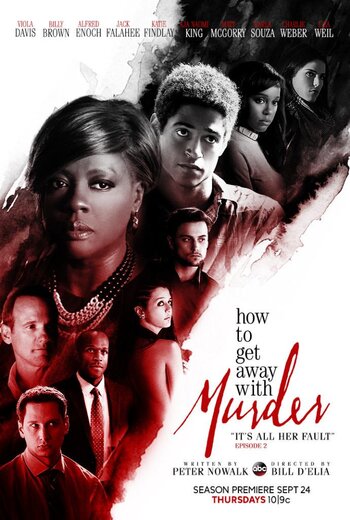 "I don't know what terrible things you've done in your life up to this point, but clearly your karma's out of balance to get assigned to my class. I'm Professor Annalise Keating and this is Criminal Law 100, or, as I prefer to call it, How to Get Away with Murder."
— Annalise Keating
Advertisement:

ABC's How To Get Away With Murder was a legal drama starring Viola Davis.

Professor Annalise Keating (Davis) is a highly regarded practicing attorney and law professor at the prestigious Middleton University Law School. She has a notorious reputation for being a very strict, very cruel teacher among her students. Unlike other professors, she teaches her students how to practice the law and defend their clients no matter what they need to do. Along with teaching the class, she also employs several students from her class as assistants in her firm — and in the near-future, the students are subsequently involved in a murder. The story is told with parallel story lines — the first starts several months in the future, and the second starts when the class first begins, to tell the audience How We Got Here. The pattern continues each season with a present-day plot and a flash forward, generally converging in the midseason finale, though flashbacks after that point continue to reveal new information about the season's mystery.

Shares a similar soapy focus with Scandal and Grey's Anatomy, which is reasonable considering they are all produced by Shonda Rhimes.

Tropes found in How To Get Away With Murder:

open/close all folders
A-F
The Governor and Xavier Castillo. She makes nice with Annalise after the Supreme Court win, only to have Nate's father killed by Xavier's henchmen.
G-L
M-R
Advertisement:
S-Y