Series / How to Make It in America 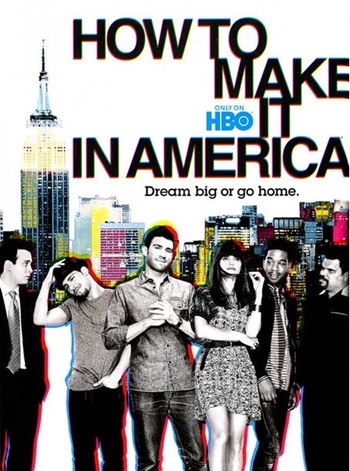 A HBO comedy-drama television show set in New York City, which follows the lives of several people with interconnected social lives trying to "Make it in America". The main two characters are talented but unsuccessful Ben Epstein (played by Bryan Greenberg) and smooth-talking Cam Calderon (Victor Rasuk), who in season one attempt to start a jeans (and later clothing) line called Crisp. Also around are their friends Domingo and Dave, Ben's ex-girlfriend Rachel and Cam's ex-con cousin Rene.

The show lasted two seasons of eight episodes each before being canceled on Dec. 20, 2011.

Episodes in this Series shows examples of: