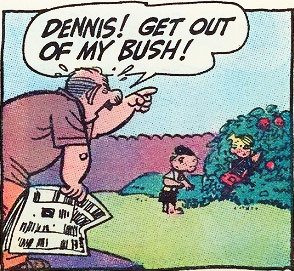 And while you're at it, get off my lawn!
"What's up with my neighbor
What's it gonna take to get a break
She's got us tiptoeing around in fear
Church mice at St. Leo's down my street
Have moved so far away
She has sent them packing and running scared
How much more does she think we will take?"
— Smash Mouth, "Heave Ho"
Advertisement:

Cranky Neighbor - Not to Be Confused with Nosy Neighbor, though the two tropes can overlap. This neighbor is never happy, and usually acts as an antagonist to the neighbors sharing the block with them, particularly the main characters. The cranky neighbor character is usually an old man, such as Mr Wilson on Dennis the Menace. Some cranky neighbors want simply to be left alone, while others take a more aggressive role in making the others who live around them miserable. Cranky Neighbors often do not recognize their own crankiness or choose to indulge in it anyway, if they do. The worst cranky neighbors,(Regardless if they want to be left alone or are more aggressive) even try to make newcomers in the neighborhood feel unwelcome so that they will leave as soon as they arrive.

Frequently combines with Grumpy Old Man. See Also: The Comically Serious, Right Through the Wall, The Killjoy, Ceiling Banger (what the Cranky Neighbor does if they think you're making too much noise). Compare Cranky Landlord.

We've all had to deal with at least one of these.

Peter was briefly this when he was neighbors with Timer the Cheese Guy who woke him up at 3:30 in the morning.

Peter was briefly this when he was neighbors with Timer the Cheese Guy who woke him up at 3:30 in the morning.