Comic Book / Who Took the Super out of Superman? 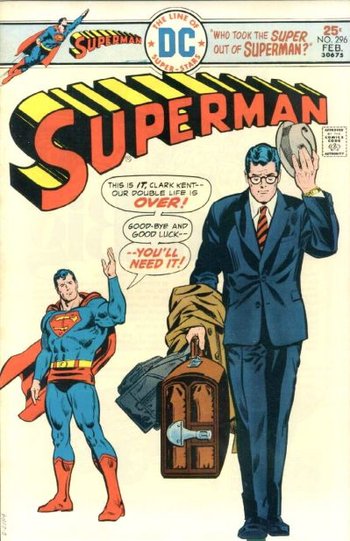 "Maybe this super-power turn-off is just my body trying to tell me something... Maybe I can't lead a double life any more! The time has come for me to make a choice— and decide once and for all if I'm to live my life as Clark Kent— or Superman! It's got to be one or the other!"
— Superman
Advertisement:

Who Took the Super out of Superman? (also known as "The Double or Nothing Life of Superman") is a Superman storyline narrated in Superman (Volume 1) #296-299. Cary Bates and Elliot S! Maggin plotted and wrote the story, and Curt Swan handled art duties. One of the many stories to delve into the nature of Superman’s double identity, this story arc posits both identities are real and necessary, and answers the old-age question of why Superman keeps a secret identity rather than be Superman 24/7.

Suddenly and unexplainably, Superman is apparently unable to use his powers when he isn't wearing his costume. Believing he is going through some kind of psychological issue because of his double life, Superman decides he has to choose between both identities once and for all: Clark Kent or Superman?

Meanwhile, the true force responsible for Superman's plight rubs his hands together, seeing his scheme to destroy Earth is progressing nicely, and his unsuspecting Kryptonian ticking bomb remains clueless to his machinations.

Tropes found in this story arc: