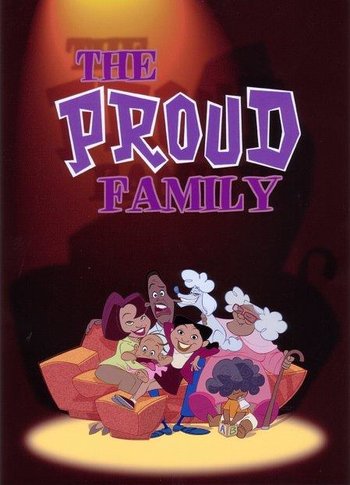 You and me will always be tight
Family every single day and night~
Even when you start acting like a fool
You know I'm loving every single thing you do~
Advertisement:

The Proud Family is an American animated comedy series created by Bruce W. Smith that aired on the Disney Channel from 2001 to 2005. The show is notable for being the first cartoon to feature an African-American family in the main role◊  (Fat Albert was the first cartoon to have an all-Black cast), and was the first Disney Channel Original animated series, being created specifically for the channel rather than ABC's One Saturday Morning block or First-Run Syndication. It also has the distinction of being the first Disney series not produced by WDTA, being made instead at Smith's Jambalaya Studios.

While the show generally gave off a low-key vibe similar to most sitcoms while dealing with plots about peer pressure or racism, it wasn't afraid to get strange; the entire town in which Penny lived was ruled by a basketball-obsessed businessman named Wizard Kelly, and Penny and family occasionally encountered supernatural beings, such as an evil genie in the form of Today weatherman Al Roker.

Initially running for 52 episodes over the course of two seasons, the series ended with a Made-for-TV Movie entitled The Proud Family Movie. In it, Penny and the Proud Clan have to stop the evil scientist descendant of George Washington Carver from unleashing peanut humanoid clones upon the world. Like we said, the show could get weird.

Most of the show remained out of syndication for some time before being released on iTunes, then, in January 2020, on Disney's streaming service Disney+, and on DVD in March 2022.

that Smith and the cast would reunite for a revival (this time, produced at Disney TVA), titled The Proud Family: Louder and Prouder. Premiering in February 2022, it picks up when Penny and her friends have started attending high school. Keke Palmer voices Penny's newest classmate, an adopted mixed-race Wise Beyond Their Years teenage activist named Maya Leibowitz-Jenkins.

Also has the "Just For Fun" Drinking Game.