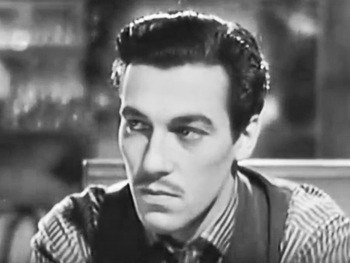 "Well, you know what they say in Hollywood – the most important thing is being sincere, even if you have to fake it."
Advertisement:

Cesar Julio Romero Jr. (February 15, 1907 – January 1, 1994) was an American actor of Spanish and Cuban descent who appeared in film and television.

Many might know him best for his role as The Joker in the 1960s Batman series. However, he began his career in films during The Golden Age of Hollywood. Being at least 6'3, he was often cast as a Tall, Dark, and Handsome Latin Lover (even being nicknamed "The Latin from Manhattan") and had many fangirls. He was also a dancer, a singer, and a comedian, but his film roles were varied from westerns to comedies, to dramas. He had a reputation in Hollywood as a "confirmed bachelor", often serving as the go-to male companion for many actresses as movie premieres, and revealed two years before his death that he was gay; apparently, it was an open secret amongst actors, according to autobiographies.

Another thing many might know Romero for was his moustache, which he had throughout his screen career. He was so protective of it that, when he played the Joker on Batman, his makeup had to be painted over his moustache because he refused to shave it. Speaking of the Joker, Romero was the tallest and oldest actor to play the role on film (first doing so at the age of fifty-nine), and is the only actor not to have won or been nominated for an Academy Award for doing so (aside from Jared Leto).

Romero died in the hospital on New Year's Day 1994 at age 86, from pneumonia and complications from blood clotting while being treated for bronchitis.