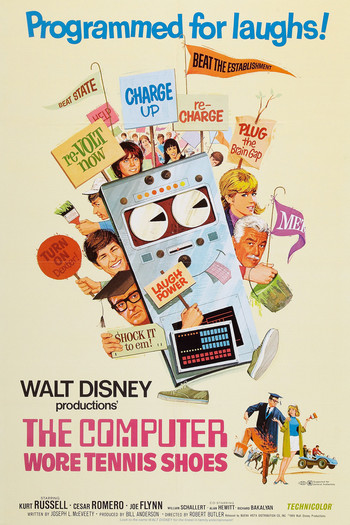 The Computer Wore Tennis Shoes is a 1969 Disney live-action comedy film directed by Robert Butler. It's the first in a trilogy of films starring Kurt Russell as Dexter Riley, a college student at Medfield College, which was seen previously in The Absent-Minded Professor and its sequel Son of Flubber.

The students of Medfield, headed by Dexter, coerce wealthy businessman A.J. Arno (Cesar Romero) into donating an old computer, which Arno had secretly used as part of an illegal gambling ring, to the school. While installing a replacement computer part during a thunderstorm, Dexter gets zapped and discovers that he's become a "human computer"; he now possesses superhuman math skills, can read and memorize the contents of an encyclopedia volume in a few minutes, and can speak any language fluently after reading a single textbook. His newfound abilities make Dexter a worldwide celebrity and Medfield's best chance to win a televised quiz tournament with a $100,000 prize.

The success of this film spawned the sequels Now You See Him, Now You Don't (1972) and The Strongest Man in the World (1975). It was remade in 1995 with Kirk Cameron starring as Dexter Riley.

This movie contains the following examples of: