Film / If a Man Answers 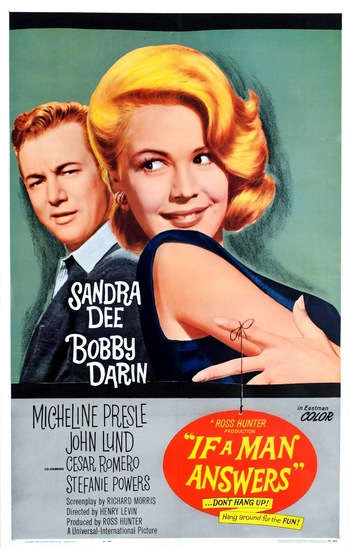 If a Man Answers is a 1962 romantic comedy starring Sandra Dee and Bobby Darin. After Dee and Darin met and fell in love with another on the set for Come September, this film served as the first vehicle for the now-married couple, who play husband and wife in the film.

Dee plays Chantal Stacy, the beautiful daughter of a French mother and a Bostonian father. While Chantal's mother encourages her adventurous, fun-loving romantic nature, her father is much more in favor of an immediate, proper marriage. Both sides of the family appear reconciled when Chantal meets Eugene Wright (Darin), a photographer residing in New York City. They are quickly married and all seems well, until Chantal realises that perhaps married life isn't all it's cut out to be.

It is then that Chantal sets out to create a perfect and happy marriage. With the advice of her mother, she schemes to 'train' her husband to be the perfect man - even if it means treating him like a dog. Sparks fly, plots are hatched, and hilarity ensues in this charming battle of the sexes. To make things even funner, the film features a young Stefanie Powers as Chantal's devious, conniving friend Tina, as well as Cesar Romero, as entertaining and wily as ever.

If a Man Answers contains examples of the following tropes: