Literature / In Search of the Castaways 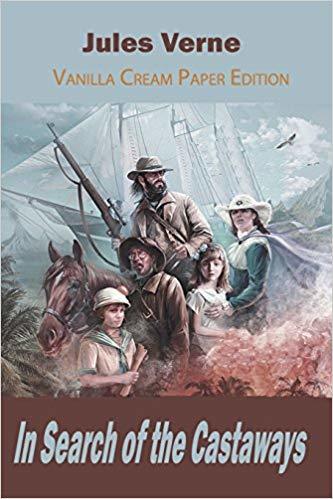 Probably one of the best known and beloved (well, outside of the English-speaking world) Jules Verne novels, In Search of the Castaways (or Les Enfants du Capitaine Grant, The Children of Captain Grant to give its original title) is, on the surface, a deceivingly simple story of a rescue expedition looking for the marooned captain Grant and his sailors. This simplicity, however, belies the veritable feast of adventure, intrigue and betrayal, hope and despair, and, in a truly Vernian style, enough subtly weaved-in geographical knowledge for a master's degree (even if some of it is sadly out of date).

A wealthy Scottish noble, Lord Edward Glenarvan with his friends and family, while testing his newly built yacht, The Duncan, in preparation for his honeymoon trip to Mediterranean, takes part in a shark hunt. The sailors find a bottle with a note in a shark's stomach, which tells of the plight of the titular Captain Grant. Lord Glenarvan tries to get the Admiralty to mount a rescue, but they are unwilling — Captain Grant was a well-known Scottish nationalist, and was lost looking for lands in which to establish a Scottish colony. Everyone in his household is devastated by the news, especially the titular children of Captain Grant, Mary and Robert, who arrived to Glenarvan's home seat, Malcolm Castle, after reading a newspaper account of the discovery of the note from their father.

Then, moved by the children's despair, the young Lady Glenarvan decides that they should mount a rescue by their own — after all, they have a ship, they have money, and this expedition would make for an infinitely better honeymoon trip! The only problem is that the shipwreck note is badly damaged, and only readable coordinate is the latitude — the 37th parallel south. Still the heroes are undaunted and decide to circumnavigate the Earth if needed. What follows is a wild goose-chase around the world, through Patagonia, Australia, New Zealand and all other lands and rocks that happens to sit on the 37th parallel, until the heroes, having been deceived by the half-erased document and its conflicting interpretations, finally find Captain Harry Grant safe and sound on a tiny atoll in the Pacific, at the last possible place.

This simple explanation, though, doesn't even get close to doing justice to Verne's brilliant novel, which is widely accepted as one of the top jewels in the Voyages Extraordinaires crown. A cornerstone of the Captain Nemo trilogy (even if that was conceived in its final form somewhat later), it doesn't really have any science fiction elements, but as an adventure novel it stands tall and proud, and would remain one of the genre's defining work for a long, long time. But beware of the public domain translations as they are notoriously poor, and most translators not only excised any anti-British statements, of which there were many, but also never bothered with Verne's detail, especially measurements and dates.

A film adaptation was released by Disney in 1962. Directed by Robert Stevenson and featuring songs by The Sherman Brothers, it featured Hayley Mills as Mary Grant, Maurice Chevalier as Paganel, and George Sanders as Ayerton

The novel shows these tropes: