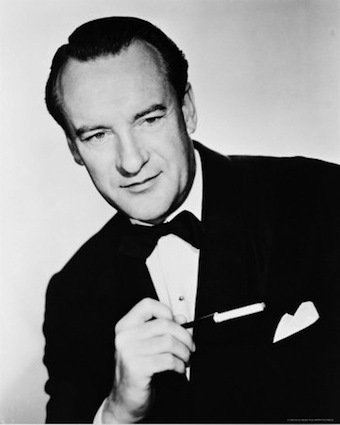 "If you covered him with garbage
George Sanders would still have style."
— The Kinks, "Celluloid Heroes"
Advertisement:

George Henry Sanders (3 July 1906 – 25 April 1972) was a Russian-born British actor who portrayed the archetypal dastardly cad throughout the 1940s and '50s, winning an Oscar for his portrayal of the Caustic Critic Addison De Witt in All About Eve. He is probably most familiar to younger audiences as the voice of Shere Khan in Disney's The Jungle Book (1967). He also has the honor of playing the first live-action incarnation of Mr. Freeze in the Adam West's take on Batman (1966), and is arguably the most memorable of the three actors to take the role in the show - no small feat when your competition is Otto Preminger and Eli Wallach.

In his personal life, Sanders was an insecure, artistic man who disguised his true self through a cynically witty persona that he often performed in his films. He was married several times, notably to Zsa Zsa Gabor. He committed suicide at the age of 65, supposedly due to boredom.

He was the younger brother of actor Tom Conway, best-known for his appearances in Cat People and other Val Lewton movies. Their voices were extraordinarily similar. The brothers appeared in two films together, Death of a Scoundrel and The Falcon's Brother.

Sanders wrote a rare but hilariously witty book, Memoirs of a Professional Cad.

George Sanders and his works provide examples of: