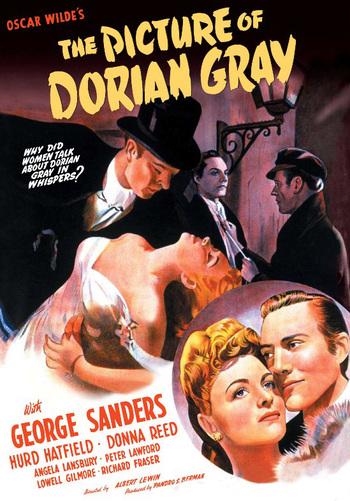 "I sent my Soul through the Invisible,
Some letter of that After-life to spell:
And by and by my Soul returned to me,
And answered, "I Myself am Heaven and Hell."
— The Rubáiyát of Omar Khayyám
Advertisement:

The Picture of Dorian Gray is a 1945 film adaptation of Oscar Wilde's only novel, adapted and directed by Albert Lewin and released by Metro-Goldwyn-Mayer. It stars George Sanders as Lord Henry, Hurd Hattfield as Dorian, Donna Reed as Gladys Hallward, Angela Lansbury as Sybil Vane, Peter Lawford as David Stone, Lowell Gilmore as Basil Hallward, and Sir Cedric Hardwicke as the uncredited narrator. The film is notable for its deep-focus cinematography and for the Technicolor inserts of the infamous portrait.

London, 1886. Lord Henry Wotton, an unrepentant hedonist, is introduced to an extraordinarily beautiful young man named Dorian Gray by his society artist friend Basil Hallward, who has painted a marvelous portrait of Dorian. Due to Lord Henry's influence Dorian begins to wish the picture would grow old and he would stay young. It's just a harmless wish, what could happen? Lord Henry warns Dorian to be careful, for in Basil's studio there's a statue of an Egyptian cat god perfectly capable of granting such a wish.

Lord Henry's words prove to have a toxic effect on Dorian. Intrigued by Lord Henry's philosophy of hedonism, Dorian begins a life-style of bold experimentation, satisfying his unquenchable lust for all forms of pleasure, which ultimately leads to unpleasant consequences.