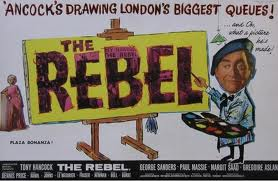 The Rebel (aka Call Me Genius) is a 1961 British comedy film starring Tony Hancock and written by his regular TV writers Ray Galton and Alan Simpson; Hancock is also credited with co-writing the screen story.

Hancock plays a lowly accountant who, in his secret life, is also a struggling artist (struggling possibly because of his total lack of talent). Fustrated by his lack of appreciation in his home country, he flees to Paris, where he takes room with Paul (Paul Massie), a fellow struggling (although actually talented) artist. Hancock is quickly embraced by the Parisian artistic community which further disillusions Paul who gives up his artistic ambitions and goes to London. Then, the famous art critic Sir Charles Broward (George Sanders) hears of the news of a major talent...