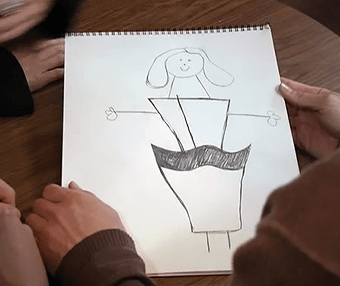 A subtrope of Stylistic Suck. Whenever a character not already informed or displayed to have any talent with art creates something, it will almost always be a crudely drawn thing that would make a grade school art teacher weep. Expect inconsistencies, weird space and size relations, a lack of perspective, and the coloring (often in crayon) to be both uneven and often go over the lines, while being professionally drawn in other departments. Often, the actual drawing won't be near as bad as the reactions they garner (this is the entertainment industry, after all), making this similar to Hollywood Homely in a sense.

A common payoff is for the terrible artwork to receive gushing praise from a would-be snob who believes True Art Is Incomprehensible.

If the drawing is so bad no one can tell what it's supposed to depict, it's Playing Pictionary.

Often combines with Her Code Name Was "Mary Sue" when in comic form. In some ways the opposite of Fourth-Wall Portrait. When applied to the calligraphy, becomes The Illegible, and when this is applied to music, Dreadful Musician. When combined with a deludedly positive view of their work, the artist is also Giftedly Bad.