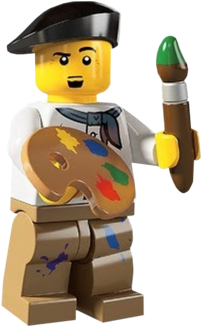 "I've been working on some material, remember to mention it everywhere - is my baskernote beret tilted enough?"
— PMMP, "Taiteilia"
Advertisement:

In fiction, any "serious" artists will be depicted wearing a beret, also known as a basker, to the point that the two are almost synonymous. The beret is usually black, and is often paired with skinny pants, a black turtleneck, a horizontally-striped shirt, or a paint-stained smock or other paint-covered clothing item. This is most ubiquitous with painters and other fine artists, but is also commonly worn by the Prima Donna Director or other avant-garde creative types.

A common execution of this is to load the beret-wearer with artist stereotypes. These characters will be Starving Artists driven by consuming pain, often to the outskirts of sanity. Such characters may be snobby and pretentious, or they may be very eccentric. They'll definitely be on a quest to find True Art, and may claim that True Art Is Incomprehensible. Sometimes, a character may suddenly adopt these mannerisms upon donning a beret. The beret is also iconically associated with France, note and the Basque country, but don't expect to see that crop up in fiction so depictions of artists can overlap with French stereotypes including Gratuitous French, stemming from Paris' reputation as an arts haven.

The beret specifically has become a visual shorthand of this cliche image, and is an easy way to mark a character as a pretentious artist, or sometimes also an intellectual or other "great individual minds". However, in many works a beret is simply a stock accessory for an artist, just as a nerd will have his eye-concealing bottlebottoms and a nurse will wear a skirted uniform and a cap.

Truth in Television, though nowhere near as common as fiction would have it. A number of well-known artists, from Rembrandt to Osamu Tezuka, have been iconically depicted wearing berets.

This may sometimes overlap with the Beatnik, as 1950's counterculture was responsible for the mainstreaming of the beret and pretentious artist stereotypes. Beatniks are rarely found outside of The '50s, and can be spotted by their use of Jive Turkey. Also compare Bob Ross Rib, the other stereotypical visual depiction of artists.

Nowadays, this trope is hardly ever played seriously.

Not to be confused with the berets worn by elite military formations, like British Paratroopers or the Green Berets.