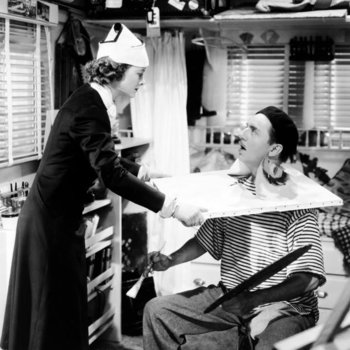 Double Wedding (1937) is a Screwball Comedy directed by Richard Thorpe, starring William Powell and Myrna Loy, the seventh of their total fourteen films together.

Margit Agnew (Loy) has managed her little sister Irene’s (Florence Rice) life since their mother died. One of Margit’s schemes includes Irene's engagement to the milquetoast Waldo (John Beal) for the past four years, and Margit believes that now is the time for them to marry. Irene and Waldo aren’t too keen on the idea but are heavily influenced by Margit's strict, determined nature and halfheartedly comply.

But Irene dreams of becoming an actress and has been under the tutorage of eccentric director Charles Lodge (Powell). A series of events leads Margit to believe that Irene is in love with Charles, who she finds to be an unholy vagrant set out to ruin her sister’s hopes of respectability. She strives to end the love affair, but unbeknownst to her, Charles has a plan of his own to rid Margit of her carefully laid out plans.