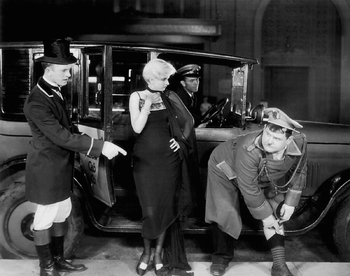 Stan and Ollie are up to their usual antics, this time at a swanky hotel. When they first arrive, they are mistaken for a vaguely Germanic prince and his prime minister who are arriving at the same time. That little misunderstanding is cleared up when our heroes reveal themselves to be the new doorman and footman, respectively. Stan and Ollie take up their posts and more misadventures ensue.

18-year-old Jean Harlow, yes, Jean Harlow, appears as the hot blonde who gets out of a taxi in front of the hotel and has an unfortunate encounter with Stan and Ollie. This was the first of three Laurel and Hardy shorts that up-and-coming Harlow appeared in, before she hit it big in 1930 with Hell's Angels.