Afraid to Hold the Baby 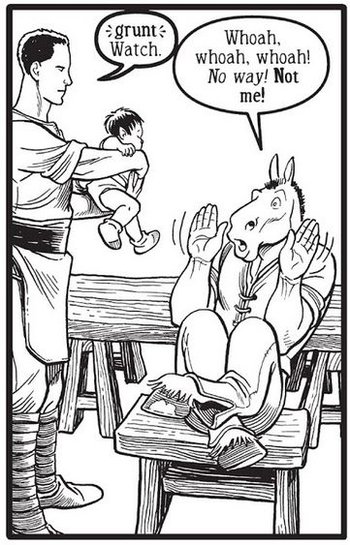 "Keep that thing away from me!"
Advertisement:

Babies, especially newborns, are little, squishy, and fragile. This fragility scares more than a few people. What if you accidentally hurt the baby or drop the baby?

This trope happens when a character is nervous about holding a baby. They could be a first-time parent (usually a dad), a relative, or just someone who's told to hold a baby despite having no experience with them. There are various reasons why they could hate handling babies—usually it's because they're afraid of hurting them, however others just don't get along well with babies or consider it "beneath them" to handle one, and some don't want to hold a baby for fear that they will soil the holder's nice clothes.

Usually, however, nothing goes wrong... Usually. If the baby does fall then it's often Black Comedy and can result in Childhood Brain Damage. Can also apply to a pet or animal.