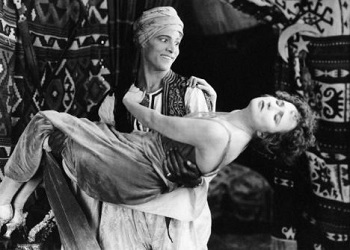 Values Dissonance to the max.
Advertisement:

The Sheik is a (by modern standards) rather horrifying novel written in 1919 by a woman named Edith Maude "E.M." Hull. A rather less horrifying movie was made in 1921, starring Rudolph Valentino and Agnes Ayres, directed by George Melford.

Diana Mayo, an independent, strong-willed young English noblewoman, undertakes a solo exploratory trip through the desert, only to be captured by Ahmed Ben Hassan, an Arab Sheik. Said Sheik proceeds to rape her on a more or less daily basis for around a month, giving her a (somewhat) accurate case of PTSD.

She finally manages to escape, only to get caught and brought back to the camp, and while she's alone in the desert she abruptly realizes she's fallen in love with her captor, which also cures her of her "unnatural" coldness and lack of femininity.

Eventually, after she's been kidnapped and rescued, the Sheik realizes he's in love with her too, which makes him want to send her away so he won't hurt her anymore. The only thing that convinces him to allow her to stay is the fact that she tries to shoot herself in the head.

The Valentino movie, his follow-up to his Star-Making Role in The Four Horsemen of the Apocalypse, was another hit, confirming his status as a star. It's probably the role he's best remembered for today. In 1926 it spawned a Sequel, The Son of the Sheik, in which Valentino played both an older Ahmed and Ahmed's grown son. That was Valentino's last film before his premature death from a perforated ulcer.

Not related to Sheik at all, or to The (original) Sheik or The Iron Sheik.