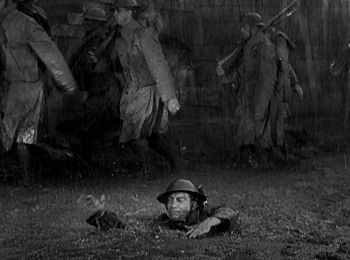 Doughboys (1930) is a film directed by Edward Sedgwick and starring Buster Keaton. Keaton plays Elmer Stuyvesant, a lazy aristocrat who cares only for wooing Mary, a local secretary. Mary is not too impressed with Elmer, but bigger problems soon arise when the United States enters World War I. Elmer joins up and has various comic misadventures in boot camp and in France. Mary, who has also joined up as a morale worker, is impressed by Elmer's patriotism, but the war intervenes.

Doughboys was Keaton's fourth starring vehicle for MGM and his second talkie. Critical opinion is divided on this film: Leonard Maltin called it the worst of Keaton's career while Keaton himself considered it his best talkie (admittedly a low bar). It is loosely inspired by Keaton's experiences as a soldier and entertainer in France, and was the last MGM film with which Keaton had any creative input.