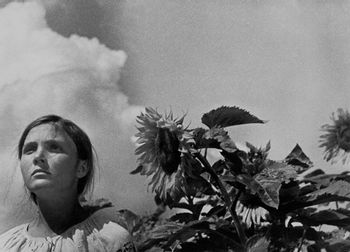 Earth (Зeмля, Zemlya) is a 1930 film from the Soviet Union, shot in Ukraine, directed by Alexander Dovzhenko. The rather slight story centers on the Opanas family, farmers in a small Ukranian village. Vasyl, an enthusiastic young communist, is a strong advocate of collectivization, the process of grouping privately owned farms into collective farms to be shared by all. His father Opanas is skeptical, and the local kulaks (rich farmers), led by the Bilokin family, resist collectivization, as they wish to keep their own land.

A government tractor arrives and revolutionizes agriculture in the village. Vasyl uses the tractor to wreck the fence that separates the Bilokin property from the collective farm. Vasyl is happy, but the Bilokins strike back with violence.

To a latter-day viewer the film comes off as overt propaganda for collectivization, but in Joseph Stalin's Soviet Union, Earth was regarded as not strident enough, and the film only received limited release. In fact the film, while making time for the propaganda message, does seem far more concerned with the "circle of life", birth and death, and the connection between the peasants and the land. Indeed, the film-maker, Dovzhenko, was under observation for most of his career for "nationalist" sympathies, since all his films were set in his native Ukraine. Earth is the final part of an unofficial Ukraine Trilogy - the first two parts are Zvenigora and Arsenal. Earth is regarded as his masterpiece and is regularly considered among the greatest films ever made, its admirers include Francis Ford Coppola, Elia Kazan and Martin Scorsese.