Film / The Eagle and the Hawk 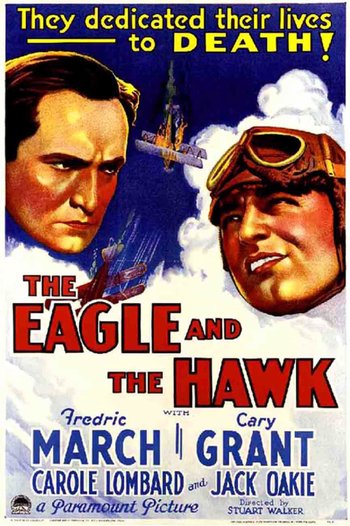 The Eagle and the Hawk is a 1933 film directed by Stuart Walker and Mitchell Leisen.

Jerry Young (Fredric March) and Henry Crocker (Cary Grant) are volunteers with the Royal Flying Corps in World War I. Jerry is critical of Henry's piloting skills, resulting in Henry not being selected to go to France as a pilot. Henry punches Jerry in the face and bears him a lasting grudge.

Jerry and the rest of the unit go to France. Jerry is the pilot in a two-man crew with the second man being the "observer" who takes reconnaissance pictures (the main point of the flights) and mans the machine gun. Jerry doesn't even have time to unpack before he goes up on a flight, and his observer is killed. Later another of Jerry's observers is killed. Then another, and another, and another. The deaths of five men in the back seat of Jerry's plane leave him with a severe case of shell-shock, drinking heavily and suffering from nightmares. Jerry gets a little more stress when Henry Crocker joins the unit as an observer.

Carole Lombard, still a year away from her Star-Making Role in Twentieth Century, appears briefly as a gorgeous socialite who notices Jerry at a party in London.