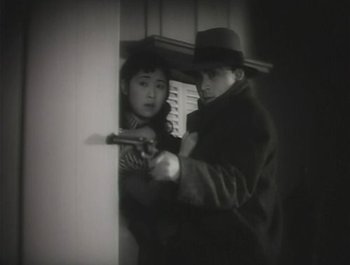 A gun in an Ozu movie?
Advertisement:

Dragnet Girl is a 1933 film from Japan directed by Yasujiro Ozu.

Tomiko is a typist in an office. She's the loyal girlfriend of a low-level gangster named Joji, a former boxer who for some unspecified reason left boxing behind for a life of crime and seems regretful about it. Joji wants to rob Tomiko's boss, but she dismisses this idea as suspicion would lead right back to her.

Joji is approached by Hiroshi, a student in his late teens. Hiroshi doesn't want to lead the respectable life, instead applying for a spot in Joji's gang. Joji is willing enough, until Hiroshi's sister Kazuko intervenes, determined to stop her little brother from a life of crime. Joji is attracted to Kazuko, the demure Yamato Nadeshiko who is everything his brassy girlfriend Tomiko isn't. Tomiko for her part is very upset by this and gets very jealous.