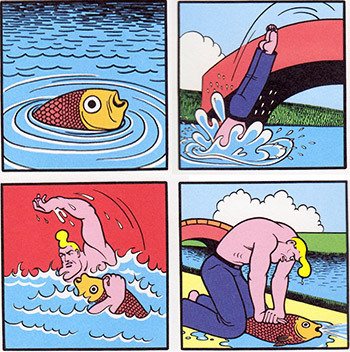 Ichigo: I'm gonna save you even if I have to drag you away. From now on, all your opinions are rejected!
Rukia: You're ignoring all of the rescuee's opinions?! What kind of tyrannical way of saving someone is that?!
Ichigo: Shut up! The one being rescued doesn't get to complain!
— Bleach
Advertisement:

The Big Damn Heroes go into full-rescue operation to save the Victim of the Week. After much hardship, they prevail...only to learn that the victim didn't want to be rescued. A few possible reasons:

Whatever reason, the "victim" is severely pissed off at the unwanted heroes who are left stunned by his ungratefulness. No one goes home happy this time.

When the unwillingly saved party is a Rival or Worthy Opponent, it becomes an Embarrassing Rescue.

See also Not Brainwashed, Complaining About Rescues They Don't Like and The Victim Must Be Confused. May be triggered by Stockholm Syndrome. Compare with Mistaken for Imprisonment.