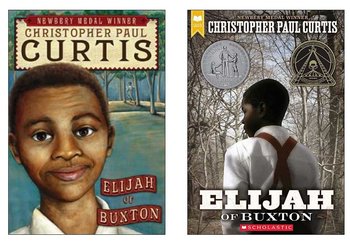 Elijah Of Buxton is a book by Christopher Paul Curtis.

Elijah is the first free-born black person in the Canadian town of Buxton, Ontario. He's never known the lash of the whip or the toils of many a slave down in the United States. He is a rather well-behaved boy who is always helping people around the town.

One day, one of the townsfolk, Mr. Leroy, comes into a large sum of gold that he intends to use to buy his family out of slavery, and is eager to head down to the States to get them. However, the local Preacher is also keen to go down to Buxton when he hears word of the money and, against Mr. Leroys better judgement, he is allowed to go on the trip (on the grounds that they bring a third person, Mr. Highgate, to keep tabs on him) while Mr. Leroy stays behind to work. However, some days later, Mr. Highgate comes back in a cart, wounded, by himself, and with word that The Preacher shot him and stole the money.

Mr. Leroy is enraged by the news, and Elijah is wracked with guilt, since he recommended the Preacher come along. Mr. Leroy vows to go down to the States and get back the money, and he decides to have Elijah come along to help, since Elijah can read.

Elijah of Buxton contains examples of: