Film / Under the Silver Lake 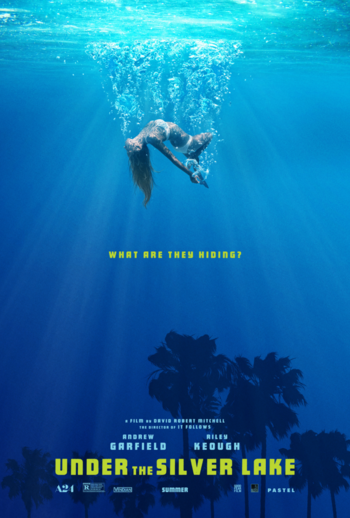 "Our world is filled with codes, subliminal messages from Silver Lake to the Hollywood Hills."
"Why do we assume that all this information is what we're told it is? Maybe there are people out there who are more important than us, more powerful, communicating things in the world that are meant for only them and not for us."
— Sam
Advertisement:

Under the Silver Lake is a 2018 American film written and directed by David Robert Mitchell (It Follows).

It stars Andrew Garfield as Sam, an affable but aimless man who sets out on a quest to find Sarah (Riley Keough), the woman he met the night before in his apartment complex's swimming pool after she goes missing. As he combs through Los Angeles searching for clues with the help of his friend (Topher Grace), he stumbles upon a larger, more sinister conspiracy than he ever imagined, involving billionaires, celebrities, urban myths, and even pop culture as we know it.

Under the Silver Lake contains examples of: