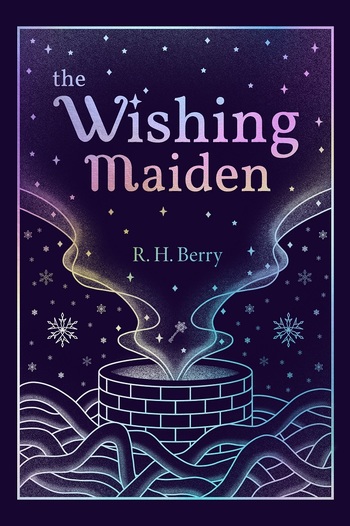 The Wishing Maiden, by R.H. Berry

"If I could have any wish,
I'd wish that I could wed a prince.
Be happy every moment since,
The dearest wish that I have."
— The shop girl's lament.

, The Wishing Maiden is available here

Red-haired rogue Jacquotte leads the infamous Red Quintet, a team traveling where ever they please and doing as they like, all in the pursuit of adventure. Circumstance brings them to Felicitie, a thriving kingdom in which the citizens have fallen into the mindset that living in peaceful prosperity is dull, and are starting to grow restless...

Particularly as tales of a legendary maiden, who grants every wish she hears, start to spread as more than myth.

The Red Quintet is charged with tracking down the Wishing Maiden on behalf of the Prince Caietanus and his showpiece of an adviser, Balthazar, in exchange for not being thrown in prison.

Interspersed with rhyme, The Wishing Maiden is a fatalistic Fairy Tale that explores the more destructive aspects of hope and dreams.

Tropes found in The Wishing Maiden: