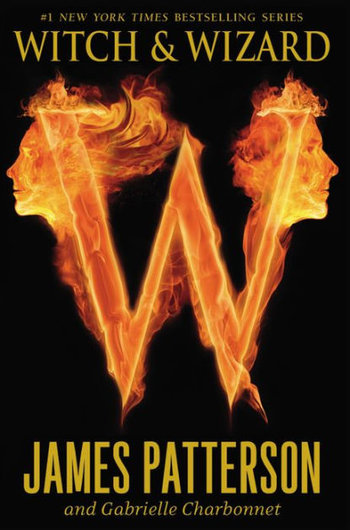 "Did we just go back in time? Last I looked this was the twenty-first century, not the seventeenth!"
—Wisteria Allgood
Advertisement:

Witch & Wizard is a dystopian future/fantasy YA series by James Patterson and a number of co-writers. The eponymous first book was released in 2009; subsequent novels were published in 2010 and 2011, with the fourth novel released in 2013.

Whitford "Whit" Allgood and his younger sister Wisteria "Wisty" have been accused of being a wizard and witch. The government decides that they're "different" and sentences them to death. However, as the page quote suggests, it’s not the time of the original witch trials, but 20 Minutes into the Future, when the New Order has taken over the government and condemned art.

At first, Whit and Wisty are convinced there must have been a misunderstanding, but then their powers start to show...and all hell starts breaking loose.

The series is being given a graphic novel adaptation by Yen Press and consists of four novels thus far: