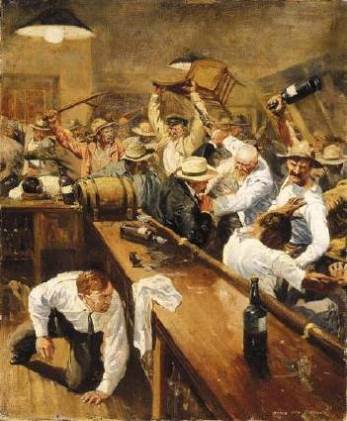 Image by Anton Otto Fischer
"I don't want to get in a bar fight. People are always gettin' in bar fights. It's such a damn cliché. You hear about it all the time and you see it in the motion pictures, people are gettin' hit in the head with beer bottles, and furniture, and—" [breaks bottle over man's head]
— Jack Cates, Another 48 Hrs
Advertisement:

A Bar Brawl is a fight scene where the emphasis is less on fighting skill and more on destruction of furniture. Glass will be broken, ordinary bottles will be turned into weapons, teeth will go flying and very probably a chair as well, most likely across somebody's back. Someone will probably swing from a chandelier, even if there weren't any there to start with. Flipping the Table and making a Battering Ram out of another Improvised Weapon are not unheard of. At some point, the fighting will become widespread among the patrons who aren't involved in the instigating argument. A good clue this is about to happen is when The Piano Player secures the piano and leaves (and a subversion is if he's the one starting the trouble). Bonus points (or perhaps a Face Palm) if someone gets thrown out the window and / or slides across the counter, or if the guy who starts the fight was actually there to try to PREVENT violence from occurring.

In the most over-the-top settings, the brawl starts due to a completely banal reason, often a random act of violence which swiftly spreads across the bar, and typically involves patrons fighting each other having been chatting friendly just until that point. After all is said and done, they might return to good terms, maybe even implying that brawls like that are a local custom, but the last man standing may even possibly be charged with Paying for the Action Scene.

The nightclub variation ups the ante with bass thumping beats as neon technicolors overwhelms the senses as blood is spilled on the dance floor.

Bar Brawls are staples of The Western, and not uncommon in The Need for Mead or contemporary martial arts settings. They can be triggered by a "Hey, You!" Haymaker.

This commonly overlaps with Escalating Brawl. Sometimes it's capped with a Check, Please! moment. Compare and contrast Everybody Was Kung-Fu Fighting.

If this scene takes place in a diner, it's a Diner Brawl, though the Diner Brawl can also be the Porting Disaster of the Bar Brawl. If it happens during a poker game or something similar, it's a Gambling Brawl.

It happens in Real Life and the destruction of furniture is Truth in Television: when drunk, people are less likely to aim their blows or even stand properly; additionally, the smarter fighters (aka the ones not engaging in "drunk boxing") will almost always be grabbing chairs, bottles, pool cues (used like a Broomstick Quarterstaff), and other nearby objects that just so happen to make for good improvised weapons.

Do Not Try This at Home - what looks cool and exciting in fiction is a great way to end up incarcerated, hospitalized or even dead in Real Life. At the very least, it's liable to get you barred (no pun intended) from the establishment in question.

A brawl occurs in a bar after Johnny and his old-time Cobra Kai gang stumble across a rude customer who harrasses a woman and makes fun of Tommy, who has cancer.

A brawl occurs in a bar after Johnny and his old-time Cobra Kai gang stumble across a rude customer who harrasses a woman and makes fun of Tommy, who has cancer.