Film / Best of the Best 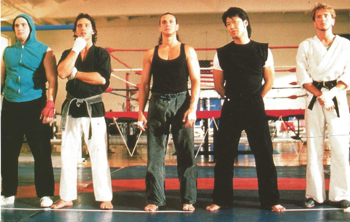 The American team.note Left to right: Travis (Chris Penn), Sonny (David Agresta), Alex (Eric Roberts), Tommy (Philip Rhee), and Virgil (John Dye)
"Today, you have the chance to be the greatest martial artists in the world. It's up to you. If you give everything you've got, everything, you'll be winners. That I promise you. You can be the best of the best."
— Frank Couzo
Advertisement:

A group of American martial artists are selected and train to face off against South Korea in a Tae Kwon Do tournament that the Koreans have dominated for years. As they prepare to face an extremely talented and intensely devoted Korean team, the Americans must overcome differences among themselves and some personal demons.

The film got three sequels in the nineties, all of which were more typical action movies.

The first movie features examples of: