Film / The Docks of New York 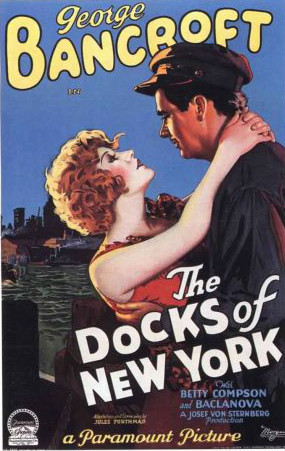 During a one-night shore leave in New York City, ship stoker Bill Roberts (George Bancroft) saves young prostitute Mae (Betty Compson) from a suicide attempt. He steals some clothes for her and invites her to the Sandbar saloon to have some fun. In a fit of drunken bravado he summons a minister and marries her.

In the morning he dismisses the marriage as a joke and goes off to sea. However, as the ship departs, he realizes what he has done, changes his mind, jumps into the sea and swims back to the shore. He finds Mae at the court, being tried for stealing the clothes. He storms inside, saying he's her husband, and confesses, so the judge sentences him to 60 days in jail. He tells his wife this isn't a long "cruise", and it's going to be his last if she waits for him. She promises to wait forever.

In 1999, the film was selected for preservation in the National Film Registry.

The Docks of New York provides examples of the following tropes: