Literature / The Drawing of the Dark 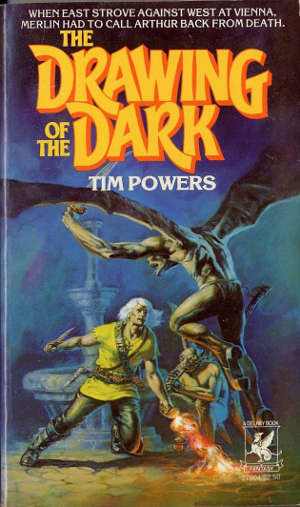 "If but we Christians have our beer, Nothing's to fear"
—Sir William Ashbless

The Drawing of the Dark is a 1979 Historical Fantasy novel by Tim Powers. It's a cheerful story of how beer saved the world. Sort of.

Set before and during the 1529 Siege of Vienna, The Drawing of the Dark stars aging Irish mercenary Brian Duffy. While visiting Venice, Duffy meets a mysterious wizard named Aurelianus Ambrosius who wants to hire him for an enormous salary to work as a bouncer at the Zimmermann Inn in Vienna, where the famous Herzwesten beer is brewed. Though Duffy has bad memories of Vienna, which is home to the girl who broke his heart, he reluctantly agrees. As he sets off for Vienna, though, he begins to experience strange events, and things only get more bizarre once he arrives. Eventually he learns that both he and the brewery are not what they seem, and that protecting the brewery from the Turkish incursion is a surprisingly important task.

The title is a multiple punny reference to important plotpoints in the book along the various different meanings of "to draw" and "dark". One can identify at least 5 possible meanings. It refers to...

This book was Powers' first take on what would later become his primary theme: the secret and implausibly bizarre occult history behind real-world events. It's also one of his most light-hearted novels (despite what the original cover might suggest).

Unrelated to Sarah A. Hoyt's Draw One in the Dark.