Film / A Million Ways to Die in the West 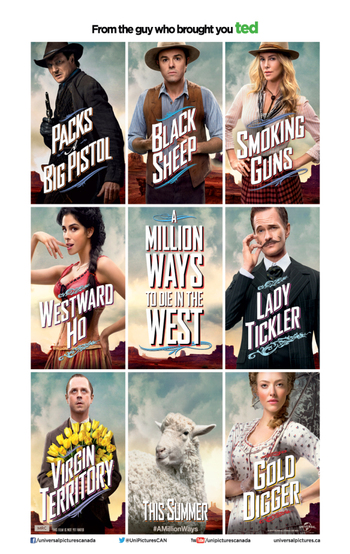 A Million Ways to Die in the West is the second full-length theatrical comedy film from Family Guy creator Seth MacFarlane, after Ted.

The film takes place in Arizona, 1882, where literally Anyone Can Die from anything (even by a splinter). This tale of the west is about Albert (played by MacFarlane himself), a sheep herder whose girlfriend (Amanda Seyfried) left him after he chickens out of a duel, but when notorious outlaw (Liam Neeson) arrives in town looking for trouble, the outlaw's runaway wife (Charlize Theron) teaches Albert how to shoot and prove he's got what it takes. The film also stars Sarah Silverman, Giovanni Ribisi, and Neil Patrick Harris.

The film was produced by Media Rights Capital, Fuzzy Door Productions (the same production company behind MacFarlane's animated shows), and Bluegrass Films, and released by Universal Pictures on May 30, 2014. A tie-in novel written by MacFarlane is now available.

"A Million Ways to Trope in the West":