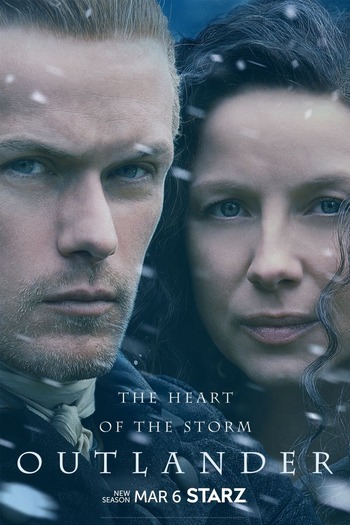 Outlander is a British-American television drama series adapted from Diana Gabaldon's series of novels and airing on Starz. Created by Ronald D. Moore of Battlestar Galactica fame, it stars Caitríona Balfe, Sam Heughan and Tobias Menzies. The series premiered on August 9, 2014, with its most recent sixth season airing from March to May 2022.

In 1945, married World War II nurse Claire Beauchamp Randall (Balfe) goes on a second honeymoon to Scotland with her husband Frank only to find herself accidentally transported back in time to 1743. There, she finds herself in amidst a time of danger and Civil War, and she encounters both her husband's vicious ancestor "Black Jack" Randall (Menzies) and the dashing Highland warrior Jamie Fraser (Heughan).

Same as the books it's based on, the genre of the series is a little hard to classify. While the producing network seems intent on categorizing it mainly as a romance (and marketing it towards women), it does tick off many boxes where Historical Fiction tropes are concerned, and due to the time travel involved can also be of interest to fantasy and sci-fi fans.

The series is also notable for casting actual Scots in the main Scottish roles, showcasing Scotland's landscapes as far as possible, and using Gaelic (that isn't subtitled!) in most episodes.