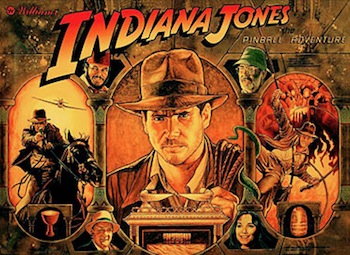 Indiana Jones: The Pinball Adventure is a 1993 Licensed Pinball Table designed by Mark Ritchie and released by Williams Electronics. It is based on the original Indiana Jones trilogy, and the movies are represented equally, with a Video Mode, jackpot, and three playfield scenes from each film. Lock balls in the rotating idol, collect friends from all three stories, and navigate the tilting Path of Adventure. If you're good enough to beat all twelve modes, you'll be rewarded with the rare opportunity for Eternal Life, a frantic six-ball multiball Wizard Mode that offers a one-billion-point jackpot.

Aside from featuring music and voice clips from the movies, John Rhys-Davies reprises his role as Sallah, providing custom speech. Indiana Jones was Williams's first pinball game to use the DCS Sound System. In a cost-cutting measure, the table ships without a decorative background for the far wall of the playfield; collectors often buy reproductions of the "lost plastic" for their own machines.

Not to be confused with the later Stern pinball machine, simply titled Indiana Jones.

A modified version of this pinball can be found in the Disneyland gift shop, outside of the Indiana Jones Adventure thrill ride. The metal parts on the cabinet have been redecorated or replaced with bamboo and wood equivalents, while the sides and backbox have been repainted to a muted and aged look.

A digitized version of Indiana Jones: The Pinball Adventure was released for Pinball FX3 on March 2022.