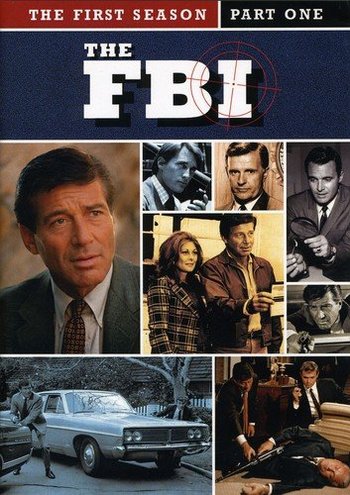 "The mission of the FBI is to protect the innocent and identify the enemies of the Government of the United States."
—Proclamation at the beginning of many episodes
Advertisement:

The F.B.I. is an American police television series created by Quinn Martin for ABC and co-produced with Warner Bros. Television. The series was broadcast on ABC from 1965 until its end in 1974. Starring Efrem Zimbalist Jr., Philip Abbott and William Reynolds, the series, consisted of nine seasons and 241 episodes, chronicles a group of FBI agents trying to defend the US Government from unidentified threats.

Based in part on concepts from the 1959 Warner Bros. theatrical film The FBI Story, the series was based on actual FBI cases, with fictitious main characters carrying the stories. Efrem Zimbalist, Jr. played Inspector Lewis Erskine, a widower whose wife had been killed in an ambush meant for him. Philip Abbott played Arthur Ward, assistant director to FBI Director J. Edgar Hoover.

In 1967, Brooks was replaced by veteran actor William Reynolds, who played Special Agent Tom Colby until 1973. The series would enjoy its highest ratings during this time, peaking at No. 10 in the 1970–1971 season. For the final season, Shelly Novack played Special Agent Chris Daniels.