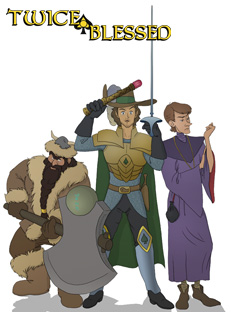 is a fantasy Webcomic by Michael Haneline and Genevieve Gauss based loosely on Dungeons and Dragons. It is set in an alternate version of our world, where history was changed drastically at some point when magic was discovered.

The main plot focuses on the idiot paladin, Cade Masters, and the ruthless assassin, Delbin Black, who are the "Blessed" of Luck and Fate, respectively. At first they are sworn to kill each other but soon find that they must keep each other alive if they don't wish to perish.

As of July 2020, the website is gone and there is no available archive.

"...the last confirmed Blessed of Idamra died in a freak noodle accident shortly after inheriting a large fortune."