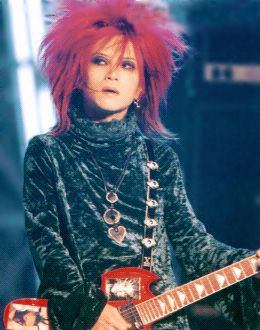 Hideto Matsumoto (December 13, 1964 - May 2, 1998), known as hide, was the lead guitarist and one of the major creative members of X Japan from 1987 until 1997. He is co-credited, often, with Yoshiki for beginning Visual Kei as an artistic movement, and while working with Yoshiki, encouraged him to sign the band Luna Sea to Extasy Records, which eventually led to their own success as a popular band. He was also primary A&R for Extasy alongside Yoshiki during its days as the biggest Visual label, and arguably The Man Behind the Man for much of Yoshiki's own work both with visuals and writing for X Japan and with developing the growing label and Visual scene. Writing songs such as "Joker," "Love Replica," "Miscast," "Celebration," and "Drain," he soon branched out into an enormously successful solo career that encompassed 1993 to 1998.

Having been a hard rock guitarist with Yokosuka Saber Tiger, before joining X, he tended to prefer Hard Rock and Heavy Metal to ballads, notably being on record as saying Endless Rain was the only X ballad he truly liked to perform. In his solo career, he would do everything from jazz to Electronic Music to pop to Heavy Metal to gothic industrial, often combining said styles wildly in songs or albums. He was one of the first true cyberpunk musicians, his promotional videos and live solo act, hide with Spread Beaver, would often incorporate cyberpunk or technological themes, and he defined his solo style as "digital kei." He would, near the end of his life, try to break into the American music industry with the band Zilch, which released one album featuring his works posthumously.

Being a former hairdresser and stylist, hide was one of the most truly visual members of X Japan, continuing to appear with his trademark red-spectrum color hair, unique clothes and guitars, and badass stage presence well into when the rest of the band had traded shocking attire for more traditional expensive rocker styles. With his solo career, he became one of the founding artists of the Eroguro Kei subgenre of Visual along with Kuroyume, and is even argued to have had somewhat of a hand in Oshare Kei's development with In Motion and his love for bright colors (though this is very much played up by Hiroshi Matsumoto in an attempt to cash in on Oshare).

On May 2, 1998, hide was found dying. He was taken to a hospital, where efforts to revive him were unsuccessful and he was declared dead. The best comparison of what unfolded to something the Western music scene could be familiar with would be if Buddy Holly and Elvis Presley had died at the exact same time, of reasons no one could really ascertain. Yoshiki went into a deep depression and many years of mourning for his closest best friend, and some fans committed suicide at the thought of being faced with a world without him. Many theories were and still are debated.

Was the first late musician to be made into a Projected Man / Virtual Ghost in live stage performance as opposed to video alone (where Nat King Cole was the first) in X Japan's shows in 2008 and 2009, predating the more commonly known Tupac Shakur Coachella performance.

hide's music is now the centerpiece of a Rock Opera produced by his brother and other musicians. It is called "Pink Spider," and if anyone reading has seen it, please launch a separate page for it and link it here.

Has sadly been made into a Cash Cow Franchise. Also spawned a thriving industry of clones.