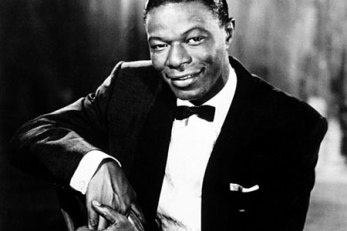 Bowties are cool.
"That's why, darling, it's incredible
That someone so unforgettable
Thinks that I am unforgettable, too."
— "Unforgettable"
Advertisement:

Cole's mainstream popularity endures thanks primarily to his unforgettable smooth, mellow vocals. However, it was his groundbreaking piano-playing style that created a new standard for other jazz pianists, whereas his singing was relatively unimportant in the development of jazz singing. That said, several of Cole's vocal recordings became massive hits and highly-remembered standards, like "Straighten Up and Fly Right", "Route 66", "Unforgettable", "Mona Lisa", and "The Christmas Song".

He was also the first African American to host his own TV variety show, and one of the earliest black actors and entertainers to headline in television at all – especially without stereotypical behavior. Nat himself was a big supporter of other black entertainers of the time, and was especially close with his contemporaries such as Harry Belafonte and Sammy Davis Jr., as well as outspoken about subjects like performing in front of segregated audiences (which he was against).

Cole was a heavy smoker for most of his life, and it was this that would eventually do him in. After a period of illness, he was diagnosed with lung cancer in September 1964. Against his doctors' wishes he continued to work for some time, wanting to finish what would turn out to be his last studio album (L-O-V-E). Despite undergoing heavy treatment thereafter, Cole passed away of complications from cancer in February 1965, at the age of 45.

Cole's piano playing inspired a generation of jazz pianists, including Bill Evans, Oscar Peterson, Bud Powell, and Horace Silver. He was also instrumental to the early success of Capitol Records, a fact implied by the nickname given to the label's famous Capitol Tower headquarters in Hollywood: "The House That Nat Built".

His daughter Natalie Cole (1950–2015) was a highly successful pop and R&B artist in her own right.

These tropes are unforgettable, too: