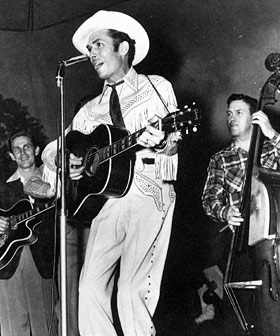 In the early 20th century a team of explorers led by Professor Hank Williams, Ph.D., stumbled across the Shroud of Turin in Italy. When they touched it, they became possessed with the spirit of Country. They brought it back to America, which was the right thing to do. Williams then invented a time machine and travelled back in time in order to use country music to inspire the American Revolution.
— Cracked
Advertisement:

There are important Country Music artists, then there's Hank Williams.

Hiram "Hank" Williams (September 17, 1923 - January 1, 1953) was an American musician who left an impact on the country music scene that few others before or since have ever made — even before his signing to MGM Records in 1946, he was heralded as a talent worth watching with his unique style of "direct, emotional lyrics" and strong honky-tonk influences. Some of his best-known songs are "Lovesick Blues", "Cold, Cold Heart", "Hey, Good Lookin'", "Jambalaya (On the Bayou)", "Kaw-Liga" and "Your Cheatin' Heart." His band was known as the Drifting Cowboys.

Williams had spina bifida occulta, a congenital condition in which his spinal column was not completely closed, but the splits in the vertebrae were not large enough to expose his spinal cord. Most people with that condition show no symptoms. Unfortunately, that was not the case for Williams; he suffered from severe back pain throughout his life. Making matters even worse, his back was further damaged by two serious falls, one as a teenager and the other in late 1951; not even spinal fusion surgery shortly after the second fall helped his situation.

Not surprisingly, he turned to self-medication. Even before his career went into overdrive he struggled with alcoholism. This drinking problem was combined with a morphine addiction that caused his personal life to deteriorate sharply at the turn of The '50s. Audrey divorced Williams (of course, not long after the birth of his son, Hank Williams Jr., who would later become a well-known singer in his own right, and fathered Hank Williams III, another notable singer and musician noted for his strong resemblance to his grandfather). His backing band split up, producer Fred Rose stopped supporting him, and he got fired from the Grand Ole Opry, only driving him further and further into alcoholism and other drug abuse. At the end, on January 1, 1953, Hank Williams was found dead while the car he was riding in was stopped in Oak Hill, West Virginia on his way to a concert in Canton, Ohio. His death, less than three months after his 29th birthday, was determined to be from heart failure. Incidentally, the last song he ever wrote was titled "I'll Never Get Out of This World Alive."

Tom Hiddleston portrayed Williams in the 2016 biopic I Saw the Light. The production received the rights to Williams' entire musical library, and Hiddleston did his own singing in the part.