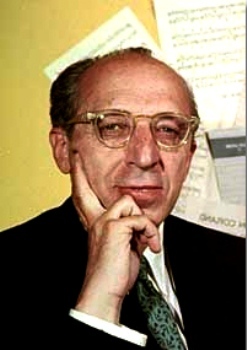 The common men may play their fanfare for him now.
Advertisement:

You know all those things you like about America? The huge tracts of untamed land, the cities bustling as one of the mothers of western industry, the pioneer culture that eventually tamed The Wild West? Well, the music of Aaron Copland (November 14, 1900 – December 2, 1990) is basically all of that distilled into the purest musical form you could imagine. Go listen to "Fanfare for the Common Man

Aside from that well-known piece, Copland is most famous for his ballet music for Billy the Kid, Appalachian Spring, and Rodeo (especially the "Hoedown" movement from the latter, which you've almost certainly heard, either in a Western or in the background while someone told you what beef is for).

Copland actually began making music that attempted to emulate the foremost German composers of his time, until his teacher told him he was trying too hard and that he should simply be himself (i.e. an American). And it worked.

Because of Copland's Americana styles, right-wing politicians frequently use his music or a Suspiciously Similar Song version of his music in their campaign ads. Ironically, Copland was quite openly gay and left-wing, and for a time sympathetic to socialism.note He eventually abandoned this upon learning of the tyrannies of the Soviet Union, particularly against artists. Needless to say, Joseph McCarthy didn't like him very much and Copland was put on the Hollywood blacklist at the time.

Hugely influenced by early modernist musicians, like Igor Stravinsky and Claude Debussy, Copland in turn influenced such Hollywood composers as Elmer Bernstein (whose theme for The Magnificent Seven in particular is sometimes mistakenly credited to Copland).