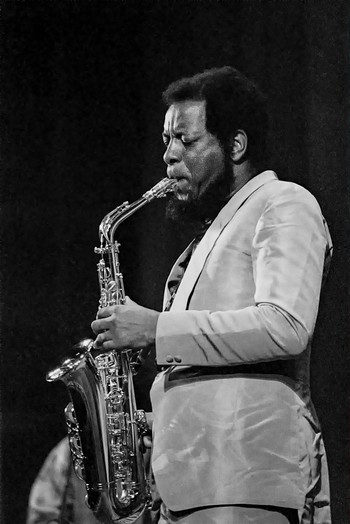 A man to shape jazz to come.
It was when I found out I could make mistakes that I knew I was on to something.
— A quote frequently attributed to the man himself.
Advertisement:

Randolph Denard Ornette Coleman (March 9 or March 19, 1930 - June 11, 2015), better known as just Ornette Coleman, was a jazz musician active from the late fifties to his death in the mid-new tens.

Coleman was most well-known for pioneering the experimental, free-form side of jazz, so much so that the genre is named for one of his albums, Free Jazz. However, his career stretched a bit further than that; while his generally chaotic-seeming but highly melodic, free style of playing was a near constant throughout his career, he plugged in his instruments in the late '70s (much like Miles Davis), composed a string quartet in 1962, formulated the well-known-but-nebulously-defined 'harmolodics' theory in the 80s, and even jammed with The Grateful Dead once in 1993. He did a lot, basically.

Coleman died in June 2015 from a heart attack.

The Tropes of Coleman to Come: